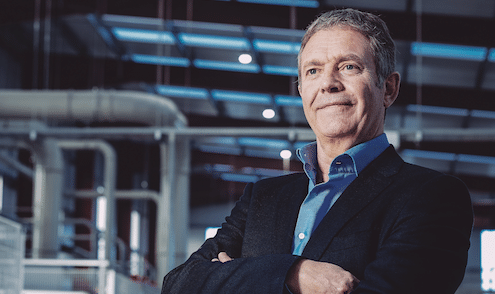 David Henderson: ‘We had some tough times in the past but we are now well on our way to doubling turnover’

In 1946, David Henderson’s D-Day veteran father Sam returned from fighting in France to find his mother had saved £500 to give her son his start in business. Sam then invested in a fledgling sand and gravel company which had been set up five years earlier by his brothers.

By the time his son graduated from Queen’s University in 1976, Sam had helped build a significant concrete company in Tobermore – and David was ready to follow in his father’s footsteps.

David originally joined as a production manager, but the engineering graduate became managing director in 1987. The second eldest of four siblings, David was the only one to enter the family business. “I always worked here during the summer when at school, driving forklift trucks and shoveling concrete,” he says. “It was always what I wanted to do, there was never any doubt. My dad was keen as well.”David and his father eventually bought his uncle out of the business around 35 years ago. “That really left my father and myself to argue with each other,” he jokes. “My father was actually quite relaxed about stepping back and letting me get on with it.”

Last week marked 20 years since David lost his father at the age of 79. In the 43 years since joining the family firm, David admits to making many mistakes along the way. But learning from those mistakes has produced a world-leading £50m paving business which has set the standard for the industry. Getting there has been something of a roller-coaster ride. Now aged 65, David recalled a challenging era throughout the 1970s and 80s when competition in the concrete product industry was fierce and margins minuscule.

Gradually the company began to diversify, developing its own range of higher value paving products. Although much more complex to produce, the margins were far greater. “It was a gradual process of innovation, of moving from cheaper products to higher value products,” says David. Like many firms involved in the construction trade on the island, Tobermore saw production heavily ramp up during the heady days of the Celtic Tiger building boom.

“From 2000 up until 2007/08, we really rode the crest of that wave in both Northern Ireland and southern Ireland. At its peak, 60% of our output went over the border, to Galway, Cork and Dublin. We would have had 50 truckloads a day at a time going into southern Ireland.Our turnover at its peak in southern Ireland was about £26m. But through the recession, that went down to £2.7m. We were a business of 260 people and we eventually shrunk to 140 people in 2011/12. “They were very difficult and tough times.”

While the credit crunch left many construction firms broken or on their knees, Tobermore’s decision to hold onto the considerable profit it made during the three-year height of the boom, left it better able to cope than others. In the three years prior to the property bubble bursting, it reported £30m in profit over a 36-month period.

“When the recession hit, we were sitting on a lot of cash and we were able to ride out the storm,” says David. “We didn’t do any of the stupid buying property stuff. We didn’t owe any banks. “It was a painful process, but at least we didn’t have a bank manager or creditors banging at the door.”

The lucrative nature of the construction market on the island of Ireland meant Tobermore had somewhat neglected the market on the other side of the Irish Sea. “We made mistakes, but by 2010/11 we started working really hard to get into the Great Britain market. We had a better product, better price and better service, but found it very, very difficult to break into the market. People were fixed in their ways.”

Eventually Tobermore adapted its sales strategy and the deals started to trickle in. “It has been a massive learning curve for us as a business to manage it. The last five or six years have been about building our sales team into an effective unit. We now have 50 people over there on the road. We have a great general manager here, Glenn Robinson, who has done an amazing job.”

These days, Tobermore does 62% of its business in Britain. This year, it has passed £50m in turnover for the first time as a company, with profits topping £12m. Its workforce of 275 is now larger than it was at the height of the property boom. David is very honest about what it has taken to get where the firm is today. “A lot of mistakes were made along the way.”

But the lessons have been learnt. Waste has been trimmed back and Tobermore these days is an extremely efficient, well-run operation. The company now sends an average of 700 truckloads of product into Britain every month. Of those 700, just two on average miss the delivery target. “Normally the delivery accuracy from companies is 90%. Ours is 99.7%,” says David. “It’s that business excellence of doing things right.”

Each delivery is checked three different times before it’s allowed to leave Tobermore.”We believe that by doing things properly, we save money. There’s very, very little waste. A lot of that is driven by business excellence, by making sure we do things right first time.”

The managing director takes particular pride in the culture he has helped foster within the firm. “We’ve had an ethos of continuous improvement in business excellence going back to 1990, culminating in us winning the European Business Excellence Award in 2007, beating the likes of BMW. That culture – the Japanese call it kaizen – is really the mainstay of what we do.”

Tobermore is now a well-known name in the global paving product industry. In April it welcomed a series of international delegations from the US and Australia who, on their way to the world’s biggest building trade show in Germany, stopped off in Tobermore to view its operation.

“They were blown away by the quality of our product, the speed at which we run our machines, efficiencies,” David says. “Your average concrete company makes a margin of 4-6%, we’re making 25%. “That’s not easy done and it’s because we’re extremely efficient, extremely slick. There are always improvements you can make in a business and the day you think you have it sorted, is the day you’re making a huge mistake.”

“We’re very focused on the future. We have very ambitious plans. The GB market is huge and we’re only scratching the surface other there really.”

A new £7.5m brick factory is also at the planning stage, which is expected to create more employment. We think we can double our turnover in the next few years without any problem at all, if we just keep doing the right things and keep focused.”

After fully recovering from the recession of 10 years ago, David said he’s not really concerned by the ramifications of the UK leaving the EU. “Personally I’m so tired of hearing the Brexit stuff,” he says. The reality is, whatever happens with Brexit, people want to build houses, we’re still going to be building schools and hospitals.”

“I’m going to be trading primarily in GB, so I’m not concerned about Brexit, not at all.”

Now aged 65, David remains an integral part of the Tobermore team, but admitted he would like to gradually adopt a less hands-on approach. While he doesn’t have any children to follow in his footsteps, his priorities in life shifted somewhat around 18 months ago when he married his partner Karen. “She just fell for me straight away,” he laughs.

“I am pretty sure I want to keep running the business, albeit I’m not going to be as hands-on as I was in the past. It’s very important that I let the existing managers, who are doing a great job, get on with doing what they’re doing. We have great managers. I have guys here that are just exceptional. That’s something I’m very proud of.”